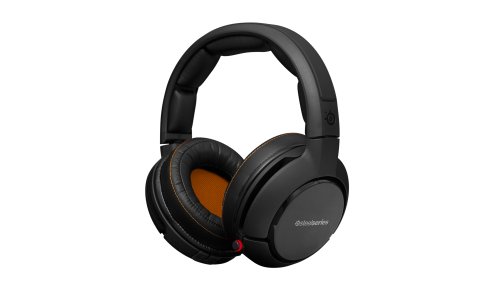 The SteelSeries H Wireless puts out great sound for gaming, with its excellent Dolby 7.1 surround sound creating a very immersive world. The plastic build does however make it seem quite flimsy.

The SteelSeries H Wireless gaming headset has received positive reviews for its excellent battery life (they come with two batteries) and its excellent surround sound, delivering both clear mids and crisp highs. They are also said to be incredibly comfortable, with users stating that they are tight in the first few days, but once worn in, they sit snugly. Their wireless range is great, the headphones are clear and don’t suffer from any issues with interference. However, users did find them to be a tad flimsy, with some finding that certain parts break after a year due to them being made out of plastic. Another annoyance for some was they could hear their own voice through the earcups. This feature is to allow you to monitor your voice volume, but some users really disliked it, stating that even breathing could be heard.  The SteelSeries H Wireless has its flaws, but does however deliver a stellar audio performance overall.

Submit your own review Cancel reply